He has to decide whether or not to bring forward his booking with the local combined harvester company. His wheat crop is not ready, but the forecast is for some heavy rain with likely flooding, which could ruin the crop. A delay on the machinery and Joe risks lodging when the stems ripen.

It is all speculative, of course. The forecasts are getting better than they used to be, but uncertainty remains.

Joe is already dressed, mulling over his decision as the sun reddens the sky and gently brings the wheat into view.

He played footy with Ralph, who runs the harvesters and could call in a favour because he will not be the only farmer in the district who has seen the weather forecast, but he must decide, or even Ralph will not be able to juggle the bookings.

Joe goes back to the farmhouse and hovers his hand over the phone.

‘G’day mate,’ Ralph said, ‘no chance before you ask. Cylinder gaskets buggered, and the spares are stuck in Gunnedah. Not much I can do with one serviceable rig. Sorry mate’.

Joe breathes and thank fate for another decision made for him.

He moves outside and sees ominous clouds building in the west.

A brief look at the economics of this anecdote explains Joe’s anxiety.

Crop yields for winter wheat are a little under 3 t ha-1 where Joe farms, and he typically has 100 ha under crops in any one season

He has negotiated a future contract with a local mill for his crop but that is still index linked to the grain price that can fluctuate by more than $100 From year to year. Currently, the spot price is firm at $500 t-1, but it could change in a heartbeat.

After the costs of production, Joe can expect $350 Ha-1 gross margin at the current market price and on the crucial assumption that he makes the yield of 3 t ha-1

And there is nothing Joe can do about the market. Like all farmers, he is a price taker.

Yield volatility is a challenge

Those dark clouds dump 24mm of rain on the wheat crop. This enough to clog up the tractor wheels with sticky mud for a week, only it rains another 10mm a week later and the predicted wet gets stuck in for another month.

The crop grows too much.

Bulging heads of wheat pull on the stems that struggle to hold them up. Many buckle and once on the soil, the fungi invade the resource-rich grain.

Joe eventually stands Ralph a beer after weeks of delays and the harvesters have retreived what was left of the crop. Yield numbers were down by nearly half. Joe’s income tanked and his balance sheet went from solid to debt. His gross margin halved and once is asset-backed debt repayments are factors in he barely has enough for a salary.

Money that would have prepared the land, added manure, maintained the fences and dealt with the latest incursion of feral pigs isn’t there. Joe will have to borrow money to get those jobs done or defer them for another year that could just as easily be a drought as a flood.

Welcome to the challenge of uncertain, volatile income.

It puts that monthly paycheck from a day job into perspective.

How to decrease yield volatility

Joe is a smart dude. He realises that the manure purchase can’t be deferred because it is his best defence against yield volatility.

The science of how soils function tells us that carbon sequestration helps make the soil more vital, retain structure to improve water balance and enhance crop productivity. For example, extensive research from China shows that an increase of the average SOM content from 1% to 3% can decrease yield variability by 10%.

Here are the numbers from two different regions, one drier than the other with higher net variability.

This relationship between yield volatility and SOM content is crucial to farmers in regions with unpredictable weather conditions—that is pretty much all farmers in modern times.

We check in with our fictitious Joe occasionally in our eCourses. He is a tenacious, hard worker and a credit to his family and profession.

Not all farmers ask the questions that run through Joe’s head. Foresight thinking that can make them focus on the health of their soil. Many are overwhelmed by the yield volatility that scrambles the farm finances.

Volatile yields translate to lumpy income that takes tremendous discipline to manage. Money management at the farm scale is not easy.

Farmers must be frugal with discretionary spending when the yields are good because they must spend to build resilience into their production—hard to do when the family have not been on holiday for five years. And then, in the poor years, they still have to spend to keep things going.

This is partly why many intensive agricultural systems are taken over by corporates with access to finance. What many farmers will need to know and act upon is the benefits of maintaining and enhancing soil carbon.

We thank Joe and all the tireless farmers who put food on our tables.

We also suggest a nod to the restless nights our farmers endure and not whinging at the price of food in the supermarket.

Hero image from a photo by Warren Wong on Unsplash 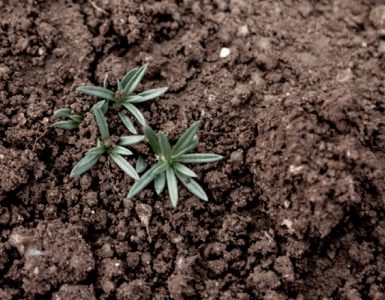