Farmers grow food to feed their families and that takes courage and intimacy with risk.

Farmers have been around for 12,000 years. They were the stars of pre-history and the foundation of every social system on record. No king or despot could rule without them. Today many urban dwellers have never met a farmer and would starve without them.

Generations of people have grown food and fibre for themselves and others. The apparent reason to be a farmer is to feed your family with a little leftover for rent, taxes, and tithes. It was a hand-to-mouth existence for many but still way more efficient than gathering and hunting.

According to the Food and Agriculture Organization (FAO), there are at least 570 million farms in the world today, most of them “smallholder” farms working less than 2 hectares (5 acres) of land.

Many of these small farms operate subsistence agriculture—farm output for survival and mostly local requirements with little or no surplus—feeding about 2 billion people in 500 million households in rural areas of developing nations.

In the last 100 years, some farmers have adopted technology and fossil fuel inputs to grow vast amounts of food on much larger farms using intensive agriculture systems. These farmers leverage external energy, initially from animals, literally horsepower, and then from machines driven by internal combustion engines to focus plant production into food for others, hopefully at a profit.

Subsistence and intensive agriculture tell us broadly ‘why farmers do what they do’, but little about the detail.

You would think that given the long history and massive volume of farming, we would know in intimate detail what farmers do and why they choose to do it.

Instead, the specific choices farmers make are still something of a mystery. Not so much whether a farmer wants to be a farmer, but what they grow, how to grow it, and whether to rear livestock or mix them in with crops.

Why farmers choose a farming system (the food production strategy) or the specifics of tillage, sowing, variety, fertiliser use, herbicide application, irrigation, harvest and post-harvest processing (the farming practices) are poorly known by the research community.

It is not for want of effort. Researchers in many disciplines, from agronomy to economics, sociology, and even psychology, have all tried to understand how and why farmers make decisions.

Despite piles of evidence, the conclusions about why farmers do what they do are of the “well, maybe because” variety.

It seems there are many influences on farmers, from their families to their mates, money, tradition, the environment, peer pressure, and government policy.

And as with all humans, into the mix is a bunch of behaviour that is not always rational.

Farmers tend to exist outside of what is normal for city folk because they have unique situations and decisions to make. They are often under strain financially and from the weather. Even their health and safety is at risk from the manual labour that comes with the job. Farming is still one of the most dangerous professions.

They are isolated in rural areas with a handful of connections to their fellow farmers and a long way from their customers.

It takes courage to be a farmer.

Researchers still don’t understand farming decisions because profit only explains some of them. There is a human emotion or two in the mix.

It’s about how humans decide and how complex decisions can be given different cultural and contextual circumstances. What you do, where you do, is a function of what you are and where you are.

And that makes any generalities quite hard to pin down.

The truth is that farmers are all these to various degrees.

They are a complex mix of people with a common link that they are primary producers using natural resources to create food for their families and saleable commodities.

The family effect cannot be understated.

A fascinating study of innovation uptake by farmers, one of the dozens undertaken across the world, showed that uptake would stall unless the communication is undertaken by women in the community who needed the innovation to be portable so that they could show it to their friends.

There are many context specific examples like this. Solutions at the local level come down to fully understanding not just how an innovation improves production efficiency or how much more profit there is in it, but in how innovation is communicated and developed and how innovation sits within a range of values and requirements that people have in their lives.

Farmers do what they do as rational economic actors and as emotional human beings with their notions of risk and reward that go beyond profit.

What we know is that farmers worldwide are fewer in number than in the historical past.

The rural workforce has declined dramatically since the arrival of the internal combustion engine in the early 1900s. Fewer farmers is an overlooked consequence of the intensification of agriculture. Machines powered by oil reduce the need for people and horsepower to grow an ever-increasing yield of foods.

Intensive agriculture is bigger than ever, input-driven through energy, machinery, fertilisers and pesticides at a scale not seen even in the most complex subsistence systems.

The farmer on a tractor covered in sensors and guided by a satellite is a different person to the farmer weeding a multi-species kitchen garden by hand. He is out there on his own in a glass sided box listening to the sound of the diesel engine and the rhythmic clatter of the bailer… or maybe a podcast.

A modern farmer can complete tasks independently with the help of the tractor that gives him the equivalent of a day’s work from 500 horses with just a gentle push with his right foot.

In all countries where intensive production dominates agriculture, the farmer has fewer people on his farm than his grandfather. This matters for future production and the mental health of today’s farmers.

Remarkably, the mindset of farmers around the world remains elusive. Remember, these brave people grow the food that keeps us alive.

They do it with great tenacity and are mostly isolated from the people who consume their produce.

We don’t know what makes them keep doing this for us. Sure they make a living, but why to choose this career over many other more profitable, less physically demanding and less stressful options?

We have no idea if they are happy, sad, stressed or rolling along to the bank with this year’s wad of cash.

We don’t know if there is anything we, the people who eat the food that farmers grow, should be doing to help. Pay a little more for our food, for example.

Farming needs to change because feeding everyone well is only possible if farmers do what they do with a smile on their faces and a willingness to embrace change.

Hero image from a photo by Sebastian Staines on Unsplash

When I go to the supermarket there is always food on the shelves. I can choose among thousands of products without a care other than for the family budget. I am one lucky…

Humans love a good argument and opinions, but we face a collective challenge that everyone should agree needs our undivided attention. 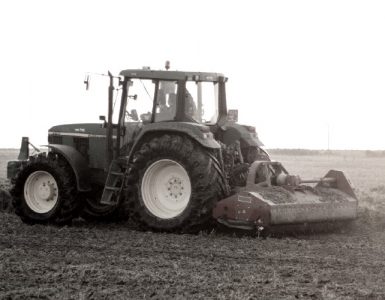 Sustainable food systems are essential for global food security and given the UN now has a set of principles for them; we decided to take a closer look.